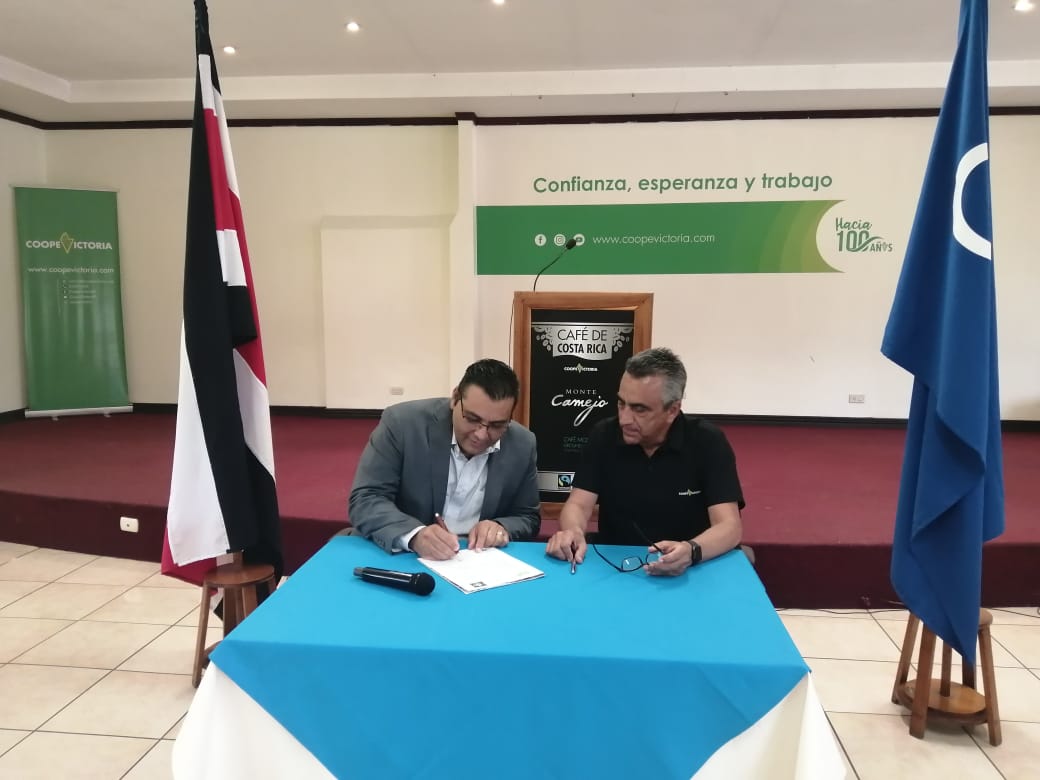 Last Friday 3rd April, the Assembly Hall of the Victoria Cooperative in the canton of Grecia, was the venue for a historic signing between this canton and the city of High Wycombe, England, as sister cities for Fair Trade.

Thanks to this signature, an agreement has been created based on the principles of cooperation, friendship and understanding of Fair Trade between these two cities; as well as a link for the development of ethical and sustainable business projects related to social, cultural, environmental, agricultural, industrial and educational issues.

“We are very pleased with the signing of this letter of understanding between Grecia and High Wycombe. Today, we see the result of many hours of work and effort by many people, we want to congratulate CoopeVictoria for motivating us to participate as a Local Government in an issue as important as supporting our producers, we know that very soon we will begin to see the fruits of this brotherhood,” said Mainor Molina Murillo, Mayor of the canton of Grecia.

The initiative to turn Grecia into a Fair Trade city arises from the fact that CoopeVictoria has been a Fair Trade certified Cooperative for around 10 years, and as part of its business responsibility, the project “Grecia, city for Fair Trade” arises .

“The fact of being certified as Fair Trade means that CoopeVictoria performs good socio-environmental practices as part of its agro-industrial activity. This certification has allowed us to award Grecia as a certified city that promotes Fair Trade. Thanks to this process we have made friendships with other cities in the world, also certified, and when starting to carry out joint projects, brotherhood initiatives are born that directly benefit the producer and the consumer,” added María Ángela Zamora Chaves, Manager of Corporate Sustainability of CoopeVictoria.

From this moment, we will work on projects with the aim of promoting the importance of Fair Trade at a social level, highlighting the great contribution to the economy that the brotherhood can generate among cities that increasingly seek the consumption of products developed through responsible practices.